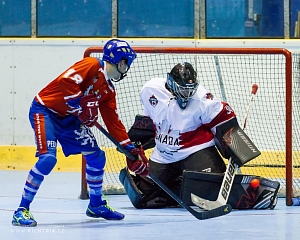 In existence since 1974, the OBHA continues the next phase in ranking the top 25 teams heading into the 2019 campaign and 45th year producing excellence in the sport of ball hockey.  The North American Ball Hockey rankings for 5 on 5 indoor version of the sport via reports from the scouting staff and without further ado……

The Top 25 North American Ball Hockey rankings(based on club teams and not all star team/pick ups for events) and below are the 2019 rankings:

1) Brampton Express
• Best Players – Shawn Hannon, Marcel Mallais, David DiGironimo
• X-Factor – Matt Tremblett – Mr. Everything for this team as they continue to find themselves in transition and attempting to find balance between veterans and youngsters
2) Montreal Red Lite
• Best Players – Yannick Labonte, Carl Ghilarducci, Kevin Kuczmarski
• X-Factor – Danick Martel – plays much bigger than his slight frame and is gifted offensively
3) Chamber of Montreal
• Best Players – Steve Proulx, Mytia Moisseron, Phil Di Giacomo, Mattieu Ferron
• X-Factor – Proulx, Di Giacomo and Ferron seem to be the next stars coming from the Belle Province
4) Pittsburgh Gods
• Best Players – Steve Gregory, Rick Zimmick, Jon Rethage
• X-Factor –the sum of their parts is much greater than the individual accomplishments and this is their strength, but also biggest weakness as the shortage of the ‘go to guy’ in big games is the teams greatest need
5) Boston Saints
• Best Players – Luke Jones, Ricky Masterprieto, Matt Gilchrest
• X-Factor – Sean Ferguson – he is a legit first line center with size, experience, and knowledge and has competed at the international level where he was a strong supporter to the team
6) Quebec Sports Elite
• Best Players – Kevin Gauthier, Kevin Lamothe, Cedric Jean, Anthony Nellis
• X-Factor – the team comes from a 3 on 3 version of the sport so how quickly they adapt to the 5 on 5 game is key and impressed at the US Nationals
7) Metro Orangemen
• Best Players – Chris Creador, Chris Cerqueira, Ricardo Pires
• X-Factor – Paul Zarnett – the team plays defense first and where else does that start, but in the net and among the best is this tendy
8) Penn Hill Arsenal
• Best Players – Bill Sullivan, Matt Kiesel
• X-Factor – Goaltending is where the team seems to fall just short and they need their goalies to come up big as the forwards and defence to be there in the big games
9) Penetanguishene Blazers
• Best Players – Matthew Paul, Jacob Robitaille, Ruan Badenhorst
• X-Factor – try to find the right mix of players from a small league to raise their game and play on the big stage against the best
10) Garden City Warriors
• Best Players – Tim Ryan, Matt Marotta, Tim Papagno, Kenny Patrone
X-Factor – the team on the rise and has made the biggest jump into the top ten and has many youngsters pushing the veterans and this team will need to be watched this year and moving forward
11) Dek Hockey Boucherville
• Best Players – Olivier Levasseur, Alexandre Richer, Jesse Arbour-Roch, Steven Arbour-Roch
• X-Factor – Levasseur is the best defenceman outside of Quebec that isn’t known yet! but can flat out play
12) Edmonton Savages
• Best Players – Stephen Dabadie, Scott Holben
• X-Factor – this team needs to find that extra gear as they seem to have dominated the province of Alberta and need to find the next gear to compete against the best teams
13) Newfoundland Blackhorse
• Best Players – Kevin Reid, Marcus Power, Patrick O’Keefe
• X-Factor – the torch has been passed to the youngsters and now it is up to them to maintain the spirit of the Black Horse
14) Leominster 74’s
• Best Players – Bobby Housser, Doug Croteau, Mike Colcord
• X-Factor – Housser is loaded with skill and speed making him a dangerous and valuable player on this long time powerhouse
15) Team Manitoba
• Best Players – Remi Laurencelle, Kalan Kastas, Derrick Gingera
• X-Factor – Dustin Kelly – the go to guy for the ‘Big M’, he can play in all facets and is relied upon to lead the team offensively which proves difficult when others can’t match his skill set
16) St. Catherines War Pigs
• Best Players – Eric Tardif, Munavar Hamdami, Brian Szolga
• X-Factor – Bram Leggat – underrated netminder that has a tremendous amount of pressure on him as he must keep the opposition under two goals against every game in order to grab wins
17) Leominster Americans
• Best Players – Korey Wilson, Matt Caron, Jorden Senacal
• X-Factor – the biggest challenge for this group of youngsters is showing up for every game
18) Vancouver Falcons
• Best Players – Marcel Lafortune, Dylan Churchwell, Trevor Mainman
• X-Factor – Adam Butler is the key in the nets as the offensively challenged team plays best in low scoring defensive games.
19) Belleville Msagro
• Best Players – Evan Greer, Liam Hayes, Pat Millington
• X-Factor – try to find that chemistry to match the individual talent from a group that is built from players throughout their league program against teams that play together all year long
20) Granby Pile Ou Face
• Best Players – Jason Larochelle, Olivier Davignon, Keven Rousseau, Charles Monette
• X-Factor – Raising their game in the big games
21) Saint John Most Wanted
• Best Players – Riley Craft, Matt Morehouse
• X-Factor –the torch has been passed to the youngsters to carry on the Most Wanted tradition
22) North York Hitmen
• Best Players – Jonathan Puliccichio, Victor Azevedo
• X-Factor – Victor Azevedo – he is a shut down defenceman with offensive flair and with his size/speed and can alter the tempo of the game as he glides effortlessly around the floor
23) Montreal Powerball
• Best Players – Jonathan Gagne, Marc-Andre Trudeau, Olivier Gremier, Pierre-Olivier Girouard
• X-Factor – Coming together versus the best teams proves to be their obstacle with a team loaded with talent
24) Quebec DDLC
• Best Players – Guillaume Nadeau, Antoine Fortin, Gabriel Parent, Steve McKinnon
• X-Factor – stepping up and matching the top teams offence
25) Granby Dek Hockey
• Best Players – Samuel Lauzon, Jason Tracey, Jonathan Delorme, Samuel Deslande
• X-Factor – goaltending and defence is essential for the team to move up into the top 20
The rest of the best…..
26) Ottawa Godfathers 27) Montreal Machine  28) Niagara Rebels 29) Barrie Flyers 30) Sherbrooke Camping 31) Fort Mac Snafu 32) Vaughan Red Wings 33) Quebec Irlandais 34) Buffalo Fusion 35) Richmond Hill Falcons
Please visit www.ontarioballhockey.ca for stories and updates for the sport of ball hockey
To get pre-registered for the 2019 CanAm Ball Championship where ,000 will be up for grabs.  For information and to register email info@nationalballhockeycanada.com as only 16 teams will be confirmed
For CanAm information, click the link below
https://www.weareballhockey.com/leagues/99-2019-bauer-canam-championship.html
Last modified: 2019-05-10 15:46:55
Back
sa
memory usage 357.8 kb