CANADA – The Best Junior U-18 Players in the Country

The National Ball Hockey Association of Canada is once again pleased to announce the 2020 Under 18 Junior Team Canada ball hockey team roster that will represent Canada at the 2020 World Junior Ball Hockey Championships in Rovaniemi, Finland.

Held every two years, the World Junior Ball Hockey Championships showcases the best under-18 ball hockey players in the World.  U18 Junior Team Canada returns to defend its 8 year reign as World Junior Ball Hockey Champions winning Gold in Pisek, Czech Republic in 2012; Budapest, Hungary in 2014; Prague, Czech Republic in 2016; and most recently in Nitra, Slovakia in 2018.

The team selection was led by GM Jacobi and his team of staff and scouts, and all players have been evaluated throughout the ball hockey season including league games, Provincial Championships, and ultimately at the CanAM Ball Hockey Championships.

“We are excited about the players we have named to Junior Team Canada. The selection process was extremely difficult, but I believe we have a team that is highly skilled and continue to push the pace at the World Championships and will once again battle for the Championship,” said Jacobi.

Jacobi continues, “The team will gather in Oshawa in June for a two-day camp prior to flying over to Finland so to allow players to familiarize themselves with what we would like to do as a team, but more importantly to have the players get to know one another and come together as a team.  If the team comes together and bonds, if we work hard with and for one another, I believe the results at this Championship will again favour Canada.  We are aware we have a target on our backs; every year the World teams continue to get better and stronger, and when playing against Team Canada, we know we will always get the other teams best game.  But in the end, we are representing Canada Ball Hockey, we will set our goals high, and with our preparation, our work ethic, and our attention to detail that will get us to where we want to be.”

Commenting on the goal of the 2020 teams Steven Dockerty, National High Performance Director adds, “we have a Mission Statement - To prepare and assemble a team of the Country’s best junior ball hockey players to compete for gold at the WJC. To field a team that sets extraor­dinary standards for competitiveness, sportsmanship and team continuity. To create a ‘life experience’ for the members of the JTC and the officials.”

Ball Hockey is an amazing sport and these young men are truly fortunate to have the opportunity to compete with the best in the world and absorb the culture of each European host city” Dockerty concluded with “The ultimate goal is to ensure each player has a life experience that he can take with him for years to come.  We are pleased with the scouting, selec­tion and acceptance of the players chosen for the team.’

“Having spoken to all members of the coaching staffs throughout this process, I am confident that the work that they have put in will translate into a highly satisfying trip along with a good showing on the floor.” said Dockerty. “In the last four international competitions the staff thought out all the little things and planned accordingly because once you start traveling with this amount of players plus staff in a short period of time through major European cities, it all has to run smoothly from start to finish in order for these players to produce on the floor.”

People that tend to be missed in these types of announcements are the local coaches, associations and family members that have helped the players get to this level, along with these individuals all those that scouted for Junior Team Canada at local and regional events should take pride in this team, as they too played a big part in the team composition.

“On behalf of the National Ball Hockey Association of Canada, I would like to congratulate the players and staff named today, along with their provincial associations, leagues, club teams, families, coaches and officials who have helped them along the way,” said Dockerty.  With that said, it is with great pride that we present you the 2020 Junior Team 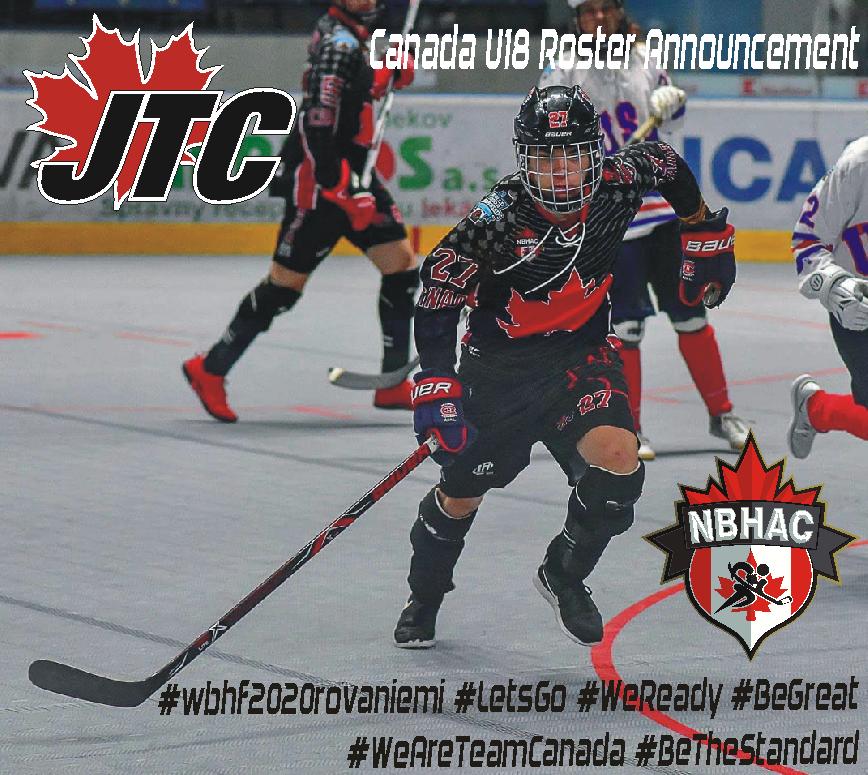